BROKEN TEETH PULLS BACK THE CURTAIN ON ‘EVIL IN THE QUEUE’ 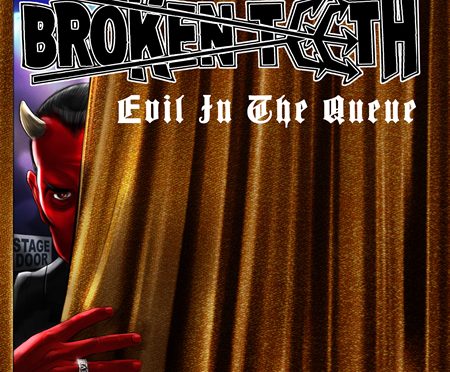 If idle hands do the devil’s work, then Broken Teeth needs a raise.

Toiling in isolation since the global pandemic pulled the plug on rock concerts, Broken Teeth is bringing the gig to the fans with a brand-new live album/DVD titled “Evil in the Queue.” Recorded and filmed December 2019 at the state-of-the-art 3Ten ACL Live venue in Broken Teeth’s hometown of Austin, Texas, the 10-track “Evil in the Queue” revisits an explosive night of ear-splitting volume and eye-spinning visuals.

“We went into this gig with every intention of capturing it, because the venue offers top-shelf production and our hometown crowds are always electric,” says vocalist Jason McMaster. “We also shared the stage with our pals, Junkyard, so we knew the energy in the room would be over the top.”

Originally intended as a longer-term project with a future release date, “Evil in the Queue” became an obvious priority in the age of Covid-19.

“The initial idea was to keep the recordings in our back pocket and save them for a rainy day, but that rainy day suddenly hit us in the face,” McMaster said. “As a band, we’re bummed that we can’t work during this pandemic and we know our fans are missing the excitement and interaction of a live rock show, so we decided now was the time to reconnect with everyone in the name and spirit of rock-n-roll.”

Featuring such long-standing, fan-favorites as “Undertaker,” “El Diablo” and “Electric” (whose lyrics provided the title for “Evil in the Queue”), the CD also includes more recent tracks like “4 on the Floor,” “Sinful” and “House of Damnation” to fully span all the horns-up highlights of Broken Teeth’s 21-year career.

The accompanying DVD adds the flame-throwing ferocity of Broken Teeth in action. Professionally filmed from multiple cameras throughout the intimate venue, the headbanging performance footage leaps from the screen in a dizzying blast of multi-colored, feel-the-sweat euphoria. If you weren’t there, you are now!

“It was a memorable night that we’re proud to relive with our friends and fans,” McMaster says. “Since then, we’ve been writing new songs and looking forward to the next Broken Teeth album, but in the meantime we all need to stay safe and do everything we can to beat this virus so we can reunite sooner than later in our beloved church of rock-n-roll.”

“Evil in the Queue” is available exclusively at www.brokenteeth.com.